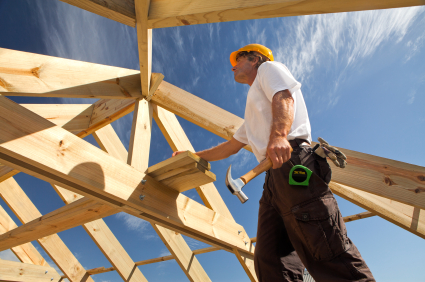 “Housing data are disappointing. Permits for new homes in March were down 2.4% from February with weakness concentrated in apartments and a slight  increase in single family homes.
Housing starts were up 2.8% in March from February and single family unit starts were up 6% on the month.
However, at 946,000 starts at annual rates, housing construction remains weak.  The NAHB Sentiment index was flat in April at 47.”

US Housing Starts Climb in March But Trends Point to Slump
U.S. housing starts rose less than expected in March and building permits fell, pointing to underlying weakness in the housing market that could persist despite better weather.
The Commerce Department said on Wednesday groundbreaking increased 2.8 percent to a seasonally adjusted annual rate of 946,000.
Permits to build homes fell 2.4 percent in March to a 990,000-unit pace.

RealtyTrac’s U.S. Foreclosure Market Report™ for March and the first quarter of 2014, which shows foreclosure filings — default notices, scheduled auctions, and bank repossessions — were reported on 117,485 U.S. properties in March, down 23 percent from a March 2013.
The monthly increase in foreclosure activity was driven by a 7 percent month-over-month increase in foreclosure starts — the initial public notice starting the foreclosure process — and a 6 percent monthly increase in scheduled foreclosure auctions. Lenders repossessed 28,840 U.S. properties in March, down 5 percent from the previous month and down 34 percent from a year ago to the lowest level since July 2007 — an 80-month low.
Report Highlights:

Zillow: The Rent is Too Damn High

By Krishna Rao
“Rapidly rising rents and stagnant incomes have made renting an expensive proposition across the country. Nationally, renters are spending more of their income on rent than they have at any point in the past 30 years….
Historically in the United States, the median household would need to spend 24.9 percent of their income to afford the rent on the median property. Currently that number stands at 29.6 percent….
Nationally, the share of income that households must devote to rent has increased steadily and consistently since 2000, as the increase in rent has dramatically outpaced the growth in income over the same period. Over the period from 2000 to 2014, median household income has increased by 25.4 percent, while rents have increased over 52.8 percent, more than twice as much.”

17% of Properties Seriously Underwater, Down From 26% Year Ago