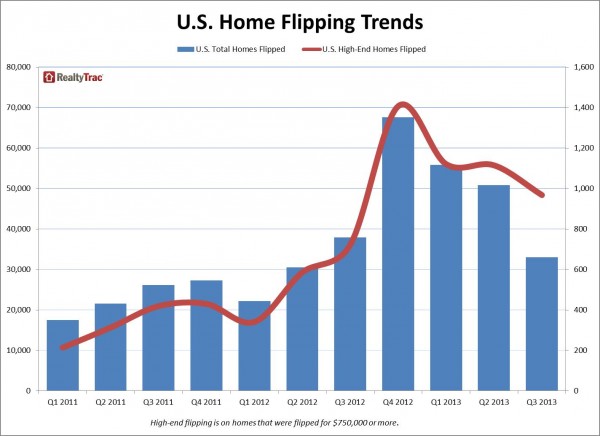 The report also shows that real estate investors made an average gross profit of $54,927 on single-family home flips in the third quarter. That was up 12 percent from an average gross return of $48,893 in the third quarter of 2012.
“Increasing home prices over the past 18 months combined with decreasing foreclosures have created a market less favorable to the high quantity of middle- to low-end bread-and-butter flips that we saw late last year and early this year,” said Daren Blomquist, vice president at RealtyTrac. “But the sharp rise in high-end flipping indicates there is still good money to be made for flippers….”

In this report, CoreLogic Chief Economist Mark Fleming, Ph.D., discusses mortgage application fraud risk in an evolving market and Deputy Chief Economist Sam Khater explains the decline in negative equity in the first half of 2013.

Additional key findings in the October MarketPulse report include:

To obtain a copy of this report, including a complete set of data and charts, visit the MarketPulse page.

Cash Sales Up to 49% of All Residential Sales