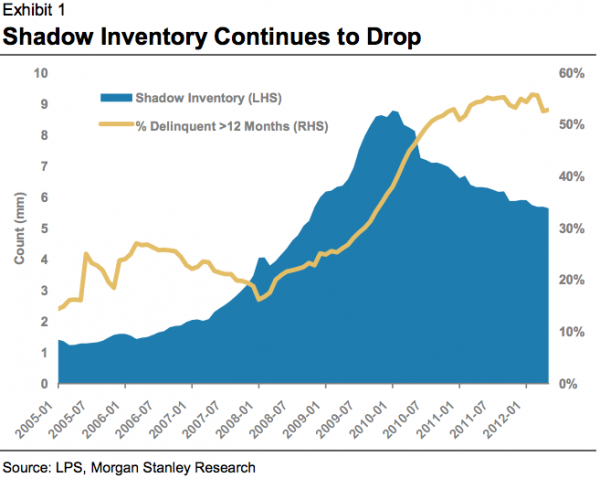 Welcome to our weekly edition of Hot Real Estate Investment News.
The big news this week: Home prices continue to rise; there’s a 24% drop in completed foreclosures compared to a year ago; shadow inventory of homes likely to be sold after foreclosure declined by 35%; and the Fed will keep interest rates low at least through 2014.
Here are the real estate investing related news items that caught our attention this past week. We hope they help you stay up-to-date with your real estate investment strategies and inspire some profitable real estate deals for you.

Data through May 2012 for the S&P/Case-Shiller Home Price Indices showed that average home prices increased by 2.2% in May over April for both the 10- and 20-City Composites.
More details here: Home Prices Continue to Rise in May 2012
See also: Case-Shiller Shows Strong Price Gains in May

There are roughly 5.65 million properties in this backlog now, down from 8.79 million at the beginning of 2010.

Housing Wire reporter Jon Prior states:
“The shadow inventory of homes likely to be sold after foreclosure declined by 35% since the peak reached two years ago, according to Morgan Stanleyresearchers.
There are roughly 5.65 million properties in this backlog now, down from 8.79 million at the beginning of 2010. These homes are either already foreclosed and not yet for sale, or they back delinquent mortgages that will likely need to be liquidated. The weight of these properties drags down home prices and resists recovery in the hardest hit areas.”

From Housing Wire reporter Jon Prior:
“The Federal Open Market Committee said it will keep interest rates low at least through 2014 but will not yet act on further stimulus to a slow-growing economy….
The target rate of funds will remain between 0% and 0.25% for the next two years, unchanged since the Fed lowered it coming out of the financial crisis in 2008.”