Today's Mortgage Debt – Secure or Not? 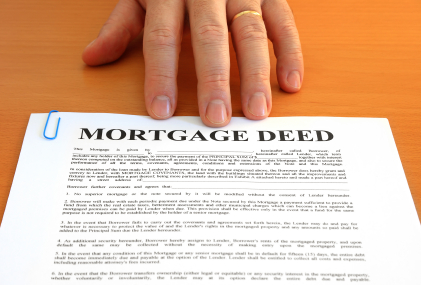 We’ve seen the tremendous growth of the “securitization of mortgage debt” over the past few decades.
There was a time when most banks made home loans and either serviced the loans or sold them off in the secondary markets to Fannie Mae or Freddie Mac (among others).
The Mortgage-Backed Securities market has expanded in size over the past three decades, for better or worse.

What Are Mortgage-Backed Securities?

Mortgage-Backed Securities are investment securities that represent shares in a pool of mortgage loans on residential or commercial properties.

How Are Mortgage Backed Securities Helpful to Financial Institutions?

The mortgages that the banks offer are sold off to Mortgage-Backed Securities investors in order to help replenish the bank’s capital. If banks were unable to sell off their mortgage loans to investors in the secondary markets, they would run out of capital to lend to borrowers.

The first formal issuance of modern day Mortgage-Backed Securities (MBS) dates back to 1970. The earliest forms of the sales of pools (or packages) of residential MBS products were offered through a government agency known as the Government National Mortgage Association (GNMA or “Ginnie Mae”).
These pools of mortgages might have included several different individual government insured or guaranteed (FHA and/or VA) fixed rate mortgages. Most of these mortgages were originated at about the same time and priced at or near the same fixed rate.
Prior to World War II and the Great Depression, the most active investors in mortgage pools were large life insurance companies, especially in commercial real estate properties, such as office buildings. In the post World War II era, mutual savings banks were the most interested investors for mortgage loans.
In the 1970s and 1980s, the MBS market expanded into working with the quasi-governmental/quasi-private secondary market institutions known as Fannie Mae (FNMA or the Federal National Mortgage Association) and Freddie Mac (FHLMC or the Federal Home Loan Mortgage Corporation).
Fannie Mae’s first purchase of VA mortgages dates back as far as 1948, which may mark the actual beginning of the secondary market for mortgage loans.

The expansion of the MBS market was increased by the emergence of the Mortgage Guaranty Insurance Corporation (MGIC) in 1957. The introduction and the subsequent evolution of the private mortgage insurance industry laid the foundation for the growth of the institutional secondary mortgage marketplace.
Without the private mortgage insurance to absorb the risks of delinquent mortgages, the secondary market’s mortgage investors would’ve had potentially more losses in their investments.

The Role of Small, Local Banks

Prior to the 1970s, most U.S. banking institutions provided consumer and mortgage loans from their depositors’ savings accounts. The bank would pay their customers a certain percentage rate for their savings accounts. In turn, they would lend out their money to other customers for automobile and home loans at a higher percentage rate.
The epitome of a small local community banking institution was the Bailey Building & Loan featured in the movie, It’s A Wonderful Life. Jimmy Stewart’s character, George Bailey, ran the Building & Loan. In the film, the local townspeople placed their lifes’ savings on deposit with the Bailey Building & Loan.
The bank would then lend the money to the townspeople in order to help them build new homes for their families. The recycled money would stay within the community of the fictional town – Bedford Falls.

How times have changed in recent decades! The money provided to you for your home is just as likely to come from Wall Street, or European or Asian investors these days as it might come from local community banks.
The funds raised by domestic and international mutual funds have been acquiring large shares of pooled MBS products over the past few decades. The size of the MBS packages can range from millions to billions of dollars.

The expansion of the MBS pools has increased the availability of loans for all types of real estate such as apartment buildings, office and retail centers, and Prime and Subprime credit residential loans.
Wall Street investment bank firms such as Credit Suisse, Merrill Lynch, Bear Stearns, Citibank, and Lehman Brothers began to invest heavily in pools of Mortgage-Backed Securities in the 1990s.
The demand for these pools of MBS products also increased the amount of capital available to financial institutions and investors.
The pools of mortgages were typically packaged according to loan to value ratios, credit grades, FICO credit scores, income and asset verification types, and other factors.
The higher the risk of the mortgage, the higher the interest rates. The yields of 8% to 15% interest rates for first and second mortgages became very attractive to investors.

When the U.S. and global financial markets almost collapsed during the week of September 29th, 2008 and the earliest stages of the Credit Crisis, it was primarily related to how the securities markets for derivatives (glorified “bets” on the future direction of interest rates and debt in some cases; a hybrid or combination of an insurance and financial contract) had “frozen” at the time due to a lack of buyers for the sophisticated securities instruments.
Near the depth of the Credit Crisis in 2009, the U.S. bond market (also known as the “debt or credit market”) was estimated to be $31.2 trillion while the global bond market was calculated at $82.2 trillion.
To compare, the estimated global derivatives marketplace is valued somewhere within the $1,500 to $3,000+ trillion dollar range in recent years.
If and when the alarms may begin sounding louder (due to financial or value concerns related to banks and assets, such as real estate and stocks), it will likely have an impact on the bond and derivatives markets, first and foremost, before affecting consumers and investors.
Tragically and ironically, private money that is not sold off in the secondary markets may seem more secure, flexible, and better priced than funds originated in the securities markets!
CLICK here to subscribe to our mailing list and get unique, fresh content like this delivered right to your inbox.